Hi
By now the fruit tree project has well and truly started. We began planting in  with Sean O hArgain, Muniteoiri agus na Paisti. It was such a great day and our little orchard will hopefully mature over coming years. On Thursday 5th of March, I planted six trees with sixth class and my son Colm who is in Junior infants at St Canice’s National School. Then it was on to the Castle Park on Friday for the main event. What a great turnout and we had a film crew from Glass Eye Productions in Thomastown. I hope to have footage of this up on this site when the edit is complete.
Finally I went to the Model School on the Comer Rd and prepared the planting holes for the parents who were coming in on the Saturday. I had to be in Wexford at our Party Conference on that day so I haven’t gone back to see how they got on yet.
All in all it has been a really inspiring project, one that I hope will leave a lasting mark on the 400 celebrations. Here’s the press release I put out that week, we will be back in Autumn to complete the planting.
Malcolm 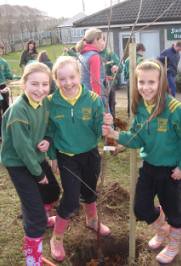 Speaking on the significance of the event, steering committee member, Cllr Malcolm Noonan stated that it was particularly poignant given that the theme of this years National Tree Week is ‘Our Trees, Our Culture’. ‘Kilkenny City and County is steeped in a tradition of growing and self reliance and this project seeks to reconnect communities with growing our own food, while enhancing wildlife in our urban areas’.

Three primary schools will take part in the first phase of the project, Gaelscoil Osraí, St Canice’s National School and The Model School and will plant small orchards of old native varieties of fruit trees including one native to County Kilkenny. On Friday March 6th, a group of twenty trees will be planted on the grounds of Kilkenny Castle formally marking the start of the project.

Brian Dillon of Future Proof Kilkenny who are involved in the coordination of the project acknowledged the support of Kilkenny Local Authorities, the OPW and other partner organisations and schools. ‘Claire Murphy of Kilkenny County Council has been instrumental in sourcing the right trees and we are most grateful for the support of the Local Authority and the 400 Celebrations Committee. Also the OPW have been most supportive of this project since it was first mooted’ he stated.

Elaine Bradshaw of Keep Kilkenny Beautiful is hopeful that the project will enhance Kilkenny’s chances in this year’s tidy towns, particularly under the wildlife and biodiversity categories.

It is hoped that the project will be completed in late autumn 2009 and the committee will be announcing a sponsor an orchard scheme to raise further funds to complete the planting. They are also hoping to identify more suitable sites throughout the City that are secure and will be well maintained.